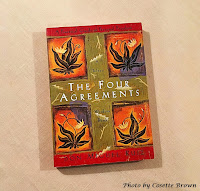 The Four Agreements by Don Miguel Ruiz is a book of Toltec wisdom which promises to be a practical guide to Personal Freedom, a promise on which it delivers.  To provide a frame of reference, the Toltec, are an ancient tribal group whose geographical roots may be found in the area just north of Mexico City.  The Four Agreements is typically referenced in the personal growth or self-help sections of the bookstore, moreover; I feel that it's offerings might be useful in the personal finance space, and additionally supports the work I've been doing around the Law of Attraction (although Ruiz never uses this term in his book).

Ruiz's book is literally structured to provide the reader with four agreements per Toltec philosophy, that we should live by in order to acquire personal freedom.  One quotation by Ruiz that really spoke to me is found on page 35, "Whenever we hear an opinion and believe it, we make an agreement, and it becomes a part of our belief system."  That statement really knocked the wind out of my sail because it provides the explanation for so many of the deeply ingrained beliefs I've had surrounding money (among other things) for as long as I can remember.


These are all examples of things we've heard from either our own internal dialogue or other people that we make agreements about.  We've either heard or said them so many times that we've made an agreement that they are true.  Once we've done this, and they've entered into our belief systems (and subsequently the Ego), we've just sealed our fate...

We hear what others have to say, but refuse to take it completely to heart.  Just because someone makes a statement that reflects their belief system such as "It's too hard to retire early," doesn't mean it applies to us!  I'm sure Mr Ruiz would agree with me that it would be nice if they didn't believe or say this in the first place!  Regardless, if we can hear the things others say, and decide actively to disallow their idea into our own belief systems, we can avoid making an agreement that the same is true of our experience.

But what of the agreements we already have that aren't working for us?  Ruiz seems to suggest that we consider what it is that provides fuel for such agreements.  What fuels a belief that "It's too hard to retire early."  This belief certainly isn't serving us well.  It doesn't make use feel good, nor does it improve our lives in any way.  In all honestly, it seems as though this belief is fear-based largely.  In fact, if we go through a number of these examples, I would wager that fear or some other such negative emotion provides its fuel.  Once we've identified what is fueling this harmful belief, Ruiz suggests that elimination of this negative agreement is as simple as starvation.  If we can limit or eliminate the negative emotion, the limiting belief can no longer thrive, and eventually, it will go away.  This eliminates it from our Ego-selves and leaves space for us to replace the limiting belief with one that is aligned with our true desires.

There is so much more to Don Miguel Ruiz's book The Four Agreements that is a treasury mine for self-discovery.  This is just my own analysis and application of just a few of its lessons from a personal finance standpoint.  I highly recommend that you pick up a copy of this book and come to your own conclusion.

Have you read The Four Agreements?  What are your thoughts about its lessons and the application of this Toltec wisdom to our financial lives?

Posted by Alacias Enger at 11:58 AM No comments: