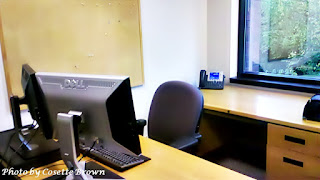 Sunday night rolls around and the feeling of dread begins to present itself.  You know that come Monday morning you'll be walking into the lion's den.  There has been a lot of changes lately with new hierarchies, new structures, new protocols, and several of them impact what you do on a daily basis making you feel less like a valuable co-creator in the facilitation of the company vision, one you've always stood behind, and more like a cog in a machine of meaningless manufacturing.  There's something shifting within your workplace setting, but also within you and your experience of it.  You've been unsatisfied for some time, but now it's taking a turn into a bit of a negative spiral.  Where you used to go home and leave your work behind, you now find that you cannot shake the negative feelings that come up as a result of what feels like job toxicity.  Whether or not the environment itself is toxic doesn't seem to matter as much as the fact that it is no longer in harmony with your intended purpose.  You ask yourself, "Where to go from here?"

Workplace dramas impact us in a number of ways.  One of the most surface ways relates to the amount of time we spend at work.  A person that works a very literal 40-hour workweek, is spending nearly a quarter of their time at work.  This time commitment is rivaled only by sleep, and with most adults, not even that!  No wonder workplace discord has such an impact on our psyches!

Furthermore, we can thank the egoic mind for contributing to the weight of work on inner peace.  The egoic mind loves to attach itself to work, making your identity dependent on it.  Thus when issues arise at work, it's as if a volcanic eruption has gone off in your world.  Divorcing your identity from work is a tall order, but there are a few small things that begin to make a large impact.  One such example may be a matter of semantics, but it has worked in my life.  "I am" isn't just a phrase.  It's a complete sentence.  "I am."  I don't really need any words after it.  Let me be clear.  I do a few things for income; one such thing is that I teach in a high school.  I am incredibly proud of my work in education.  That being said, I resist the urge to say "I am a teacher" because it makes me feel like my identity is somehow tied to my employment.  I prefer to say things like "I teach for a living.  I work in a high school with these fabulous kids."  The truth is that I do several things for a living and I genuinely enjoy all of them.  It's entirely too much of my time to be bothered doing things I don't enjoy.  That being said, "I am" is still a complete sentence.

There's also something about introductions that feeds into the issue of personal identity being related to work.  Oftentimes, one of the first things that we do when we introduce ourselves to people is identifying ourselves by telling them what we do to earn income.  It's a rather strange thing to do, isn't it?  It also seems that social protocol dictates that you're supposed to pick just one thing that you do for a living and state that during an introduction as a part of your identity.  The truth is that I earn an income doing at least five completely different things, a few of which overlap.  If I introduced myself to people by stating that "I am" those five different things, it would be a little strange wouldn't it?  Why is it any less strange to introduce ourselves to people and lead with your name and the source of your income?  Theoretically, we judge people within the first minute of meeting them.  That was always what I was taught in my actor training, and it seems about right.  So, we're all putting ourselves in the position to have people judge the kind of person we are by our appearance, name, and occupation.  It seems like we ought to shake that up a bit.  Personally, I've started challenging that norm.  I like to try breaking that habit by leading with my name and something I'm passionate about.  It seems like changing that introduction and working to break the "I am" cycle could be a valuable first step in the journey toward breaking away from the identification with work.  Our identities also get entangled in our jobs when we're dependent on them, by the way, which leads us to another point.

Another fundamental reason that workplace toxicity impacts us so deeply lies on our dependence upon work for our security.  If I am dependent on someone or something in order to get my basic needs met, I am certainly not going to want to rock the boat where that thing is concerned.  My need for survival kicks in and takes over.  That's a relatively natural instinct I'm sure, but it can lead to an unhealthy relationship with work in that it becomes altogether too easy to submit to a feeling of helplessness which is about as low on the emotional scale as you can get.  Abundance does not flow from a feeling of helplessness.  In fact, this low emotional state will create flow in your life, but the wrong kind of flow.  It will create negative flow, as the momentum swirls in the direction of that which you don't want.  Now, how to move the current the other way?  Rather than wallowing in the sense of dependence on our current, primary employer, we need to create for ourselves a sense of independence.  This key mindset shift is on that is also a huge leap up the emotional scale from that of hopelessness and dependence. But how do we get there?  The mind likes to constantly remind us of this very practical life circumstance and use it to "keep us safe" but what if we could feed the mind something equally as valid and empowering in order to trigger a feeling of abundance and independence.  Wouldn't that feel great?

What if you had a secondary job, side gig, or personal business that also earned you an income?  Even if this income was lesser than the primary source, it would seriously decrease the pressure applied to your primary job.  If the financial weight of your lifestyle is distributed among more than one income source, it clearly alleviates a certain amount of dependence on any given one of them.  This is one strategy that is in play in my life.  My primary job is the largest single source of income that I have, but I have a number of others, some of which are in the entrepreneurial and side-gig arenas.

What if you had a rather large freedom fund?  In the financial independence community, this is often known as "FU Money," and while that term is empowering to some, it doesn't resonate with me. So, I call it my "Freedom Fund."  The concept is that you have a pile of money that is somewhat liquid that is build up large enough to allow you to walk away from a toxic situation if you need or want to do so.  I did this a number of years ago, and at this point, if neither of us was working, we could last 6-8 months on it alone without a single drop of income coming from another source or without raiding any other pots of money, which brings me to another point.

The last one is actually two things that are fairly related:  financial independence (FI) and passive income.  In the simplest of terms, full FI is achieved when you have enough income from investments to allow you to live from the income they generate without having to work.  This can come from retirement accounts, royalties, rental real estate, or other types of investments.  In one way or another, I utilize each of these things, with a heavier leaning on rental real estate.  Not only will it eventually provide for me in my retirement, it also producing income that my partner and I can choose to utilize right now.

The impact of workplace drama is a very real issue that impacts so many people in a negative way.  The truth is that it doesn't have to.  We just need to recognize that dependence on our employer and attaching work to identity is part of what is creating our suffering.  Dig deep and find the inspiration to wean yourself off of being financially dependent on your employer and remember that you are more than just your job.