Something Sexy on the Sidelines 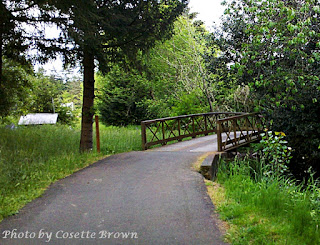 The egoic mind is a funny thing; something shiny in the background captures its attention and away we go.  We find ourselves ruminating on this little side item until it makes its way center stage, stealing focus from what might arguably be the more critical parts of the current story.  It's not to say this sexy little side number doesn't deserve its moment in the limelight; it may even become the star somewhere down the line.  But the real question is what's its place right now?  Where does it belong in my current experience?

Now the tricky part is in knowing that where our attention goes, the energy flows.  When we allow our minds to ruminate on little side items, we begin to create momentum in that direction, frequently stealing energy from other spaces in our lives.  While not always a bad thing, it's worth considering: Where do I really want to create momentum?  We've all heard anecdotes about the highly successful businessman that creates a brilliant empire, building his company from the ground up only to lose his family in the process because while he was creating momentum in this one area of his life, he failed to give attention to it in another.  While you can't entirely compare the businessman's family to the less critical side items in your life, the lesson remains intact.  Momentum is created in the direction of that which has our mental and emotional focus.  We will give the object of our mental and emotional focus the majority of our love, attention, creativity, and desires.  In the process of pouring ourselves into the object of our focus, we lay the groundwork for inspired action to flow into our experience and breath yet more life into it, and this, ladies and gentlemen, is what the beginning of momentum looks like.  Sounds pretty great actually. The creation of momentum becomes problematic when experience a lack of awareness when we don't entirely realize what it is that we're giving our attention to, or when we fail to curate the objects of our attention and something sexy on the sidelines sneaks in at the expense of something else.  It's all about deliberate creation, a phrase popular among those practitioners of Law of Attraction.  Perhaps to that term, we should add deliberate momentum as a predominant feature of deliberate creation.

Sometimes in life, we notice something on the sidelines that we really, truly want to promote to a more predominant position.  We make it the object of our attention.  We pour our love, hope, joy, and creativity into it, which leads to inspiration and inspired action.  We deliberately create the momentum that allows this thing on the sidelines of our life to flow toward the center of it.  Quite frankly, this is how many people start successful businesses.  They recognize something on the sidelines of their life that they're good at; something that brings them joy... They begin to give it their attention and become inspired to take actions to further elevate it.  Eventually, what was once their former hobby has become a full-fledged business.  Now, what about the reverse?  What about momentum that was not deliberate, that may or may not be serving our highest good?  What happens when we allow our minds to ruminate on something in the periphery that we might not really want or be ready to move center stage?

If we aren't deliberate in selecting the things we focus on, we run the risk of pouring energy into something that is not for our higher good or ultimately neglecting something that we would be served well to give more of our attention to.  When interviewing potential clients, I see this regularly.  When we start talking, people frequently get really focused on and excited about investing. They talk about how they really want to learn the skills to do that.  (Don't get me wrong, I agree that they should learn about investing, just typically not first.)  Their budget, on the other hand, seems to be something they're oftentimes way less excited about focusing on.  Budgeting doesn't generally feel anywhere near as exciting, and yet neglecting it in order to create momentum in another area prematurely can create other issues.  A neglected budget can lead to increased consumer debt, slower debt payoff, and less available funds to save or invest once you get to that step.  So, perhaps in this example, that shiny thing off to the side is likely to become a great candidate to take center stage eventually, but not immediately.  Again, it's an exercise in deciding which things in life should receive your focus (and when) so that you can create momentum deliberately rather than unintentionally.

This unintentional momentum can happen to the best of us.  If it happens that we notice ourselves focusing on something sexy on the side to the neglect of something else in our lives, we should first and foremost give ourselves grace for simply being human.  Next, it's critical that we recognize that we're experiencing some form of resistance related to the thing we're neglecting.  Investigate why.  What emotions are triggered by giving that item your attention?  Using the example of the neglected budget, could it be fear?  Do you fear learning that you're spending isn't really under control?  Do you feel overwhelmed?  Shame?  Then ask yourself, "Why?"  It's not necessary to allow the egoic mind to ruminate on the answers, but a simple awareness can go a long way.  If we can identify the resistance and reason for it, we can use that information to lead us into a state of flow.

Ultimately, it's up to the individual to decide whether that something sexy on the sidelines is the right thing to receive their focus and build momentum around, or if it's simply something that's being used as a distraction from something they've created resistance around.  It's a matter of priorities.  So, as this new year begins, and people naturally evaluate where they are versus where they'd like to be, it might be a valuable exercise to consider which items in your life are currently receiving the most focus.  Have you been focusing on something off to the side at the expense of something else in need of your attention or is this the year you intentionally promote something on the side to being center stage?  The choice is solely yours, let's make it intentional.

Posted by Alacias Enger at 6:32 PM