The Path of Least Resistance 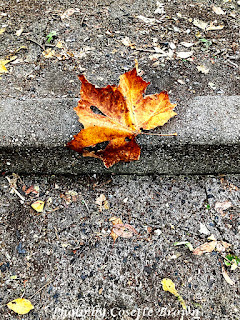 If there's anything that living through this global pandemic has taught me, it's the art of being deliberate and thoughtful with my actions.  I the morning, I would mask up just before leaving the house to get on bus number one, then bus number two.  Enter the school building; immediately hand sanitize on my way to move my timecard and drop my backpack and coat at my desk; walk down to the restroom to wash my hands; return to my room; sanitize again.  This ritual has become second nature in my life, as in the lives of many others.

The other day, I finished teaching my in-person class and left to catch one of my two busses heading home.  As I stood in my place toward the back of the bus, my eyes happened upon a woman standing just a few feet from me.  She was talking to another woman, wearing her mask as a chin guard.  I turned my back toward her so as to avoid breathing where she exhaled.  Just as I positioned myself to have my back to her, I glance up again only to see that the old man seated a few feet in front of me had his mask below his chin, and the teenager two seats away had no mask at all.  This one particular commute illustrates a tremendous source of inner turmoil I've been faced with recently (since Labor Day really).  Every day that I teach in-person at my school, I am required to take four busses to commute there and back.  While the MTA may be taking appropriate action to sanitize busses and trains, I have been interacting with people whose  perspective on safe practices are in discord with my own.

The Law of Resistance states that anything in which you resist, you draw unto yourself.  While I do my best to practice detachment in those moments on the bus and draw my attention to something that feels positive, I can definitely say that I have some resistance in that area.  What is resistance?  If you distill it down to its very basic essence, resistance is fear.  There's a funny thing about resistance, aka fear: you will encounter fear over and over again.  It will literally keep reproducing itself until you are forced to deal with it.

Strategies for Dealing with Fear/Resistance:

The last few weeks, we've spent some time talking about focusing on the present moment, as it is the only moment we're actually able to actively live within.   Focusing on the now really helps lower resistance because fear is largely attached to the future.  We need to practice centering ourselves by pulling our minds into the current moment.  Glance out the window and notice the raindrops or leaves falling.  Really watch them.  Perhaps, glance inward and notice how you are actually feeling in that moment.  If you try this you will notice that it is much more difficult to feel resistance (or fear) while you actively stare down the fear itself.  Once it has lessened just a bit, ask yourself "What can I do right now?" There are likely to be options, at least one of which will strike a chord with you.  If the situation that causes resistance is one that is likely to keep surfacing, it might also be worth considering "Is there a way to practice the manner in which I handle these situations that lesson my resistance to them?"

Sometimes the situation causing the resistance literally doesn't need to happen.  Moreover, if it does need to happen, maybe my role within it is one that can be altered?  Do I need to be a part of this situation at all?  If so, do I need to interact with this situation the same way I have in the past (that has caused me resistance)?  It's important to realize that changing your position with regards to a situation isn't the same as ignoring it in order to avoid dealing with the problem. Remember, fears of a similar nature will continue to resurface over and over again until you find a way to deal with it.

There are people in my life that have a lot of resistance surrounding the idea of retirement.  Many of them have a scarcity mindset.  They're resistant to the idea of investing, fearing that they will lose all of their money because investing is complicated and they don't understand it.  One such friend panics internally whenever related conversations come up.  First address the mindset.  This fear isn't actually a fear about what's going on right now.  Right now, this person is fine.  They're earning enough money, have some liquid savings, and spend less than they make.  This fear is 100% future based.  Starting by recognizing that they're not in a "dire place" right now is critical.  Next, consider what can be done right now?  They could open a brokerage account and fund an IRA, find an investment professional to help them, or start contributing to the 401k at work.  After considering what could be done right now, they might consider which of these options is the "path of least resistance?"  Yes, I am advocating for the path of least resistance.  They're already dealing with huge amounts of resistance and we're trying to lessen that.  Why would we want to select the hardest, most anxiety-producing option?  In this scenario, starting up the work 401k might feel manageable.  Then, when this fear comes back up (and we know it will), they can tell themselves that they've already started taking steps to address this, and invalidate that fear.  It will take time and practice to alter the course of a mindset that has been practiced over and over again.  But repeating the little actions that can be taken right now can and will help.  Especially if you consciously remind yourself that the fear is invalid or unnecessary when it comes back up.

There are other instances where changing the situation becomes necessary.  Before I started teaching, I had become extremely unsatisfied with my job.  I was greeted with a lot of resistance on a regular basis.  I felt that I worked too hard for way too little money, and no longer felt passionate about the work.  I felt like getting ahead was virtually impossible. Plus, there were certain tasks that really annoyed me.  First, I reflected on my mindset, asking myself whether or not there were things I still enjoyed doing there.  Next, I changed worked with my manager to change my position within the situation.  I switched into a slightly different role that provided me with more of the tasks I enjoyed and less of the ones that I didn't. I knew that I still wasn't entirely satisfied so I thought about what I would enjoy.  I thought back to some of the happier employment situations I had been in, and realized that I enjoyed teaching, and wanted to live in NYC again.  So, I started taking the actions that I could take in that moment, which included applying for programs that would help me become credentialed and employed teaching in NYC.  Within months, I was moving back to the city, and starting along a new career path.  I utilized the present moment to address my mindset, I changed my position within my existing situation, took inspired actions, and ultimately changed my situation entirely.  As an added bonus, addressing the resistance I was experiencing resulted in having my master's degree paid for and my income more than doubling.

Some of you may be wondering what has become of my current situation.  About a month ago, I made an appointment with my partner's primary care physician (I liked her so well I made her mine as well).  We looked at my labs, documented my family medical history, and chatted about my dietary and exercise routines.  At the end of the visit, she provided me with a letter suggesting that I should teach remotely in order to be cautious.  That same evening, I filed the appropriate request.  After that, I didn't really spend much time thinking about it.  I merely went on with my daily life.  Approximately three weeks later, I received notification that my request had been granted.  I am permitted to continue teaching remotely.

You see, the source of my resistance was related to being in crowded public places during this pandemic.  It didn't feel like something I wanted to be doing. Yet, I love my students and want to be able to provide them with the support they need.  When greeted with this resistance, I realized that it would be best for me to advocate for myself in an effort to change my position within the situation.  Now, I get to work with my very same students; It's simply the context that's changed.

Remember, the art of overcoming resistance involves confronting the fear itself.  Sometimes, it's best to go with the simplest method of doing so whether it be a slight mindset shift, or changing your position within a situation, or the situation itself.  The path of least resistance isn't necessarily a bad thing!

Posted by Alacias Enger at 5:40 PM