Thinking Outside of the Plan 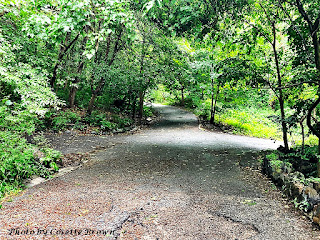 A wise person recently drew my attention to the notion that there is a certain "hustle mindset" that has become predominant among those in pursuit of personal finance.  It's certainly no surprise, as this messaging is consistently embedded into our culture.  "Where are you going?" is often asked of us, but "How are you getting there?" is not.  There is an emphasis on the speed by which we arrive at a particular destination, but little attention is paid to the manner in which we transport ourselves.  Perhaps it is also worth considering the idea that if more attention was paid to the journey, it might actually alter the destination.

The journey toward financial independence is often prescriptive, and for good reason.  There are tried and true methods that have produced results over and over again.  Now, I can't help but wonder: What if there's actually a better destination than the one you had prescribed for yourself?  I was in the periphery of a conversation recently where an individual was expressing concern about the state of their finances, and whether or not they were on track to meet a certain goal.  As this person listed all of the various things they had invested into, and the sums they had accumulated, and the payoff dates of the various things in their lives a myriad of questions began to gnaw at me.  I wanted to know: What did this person absolutely love to do?  What brings them joy?  When was the last time they felt truly inspired, and what made them feel that way?  Did they even know?  Any adjustment that anyone could offer to this person with regards to their financial plan would be minuscule at best.  This person genuinely has everything on lockdown, and yet I felt a nagging sense that perhaps they might need to look at things a bit differently.  I'm not sure they need much of a financial checkup, but perhaps a lifestyle check-up.  I'm not referring to spending.  I'm referring to inspiration.  Sometimes, we get so locked into our plans that we fail to make room for inspiration.  Inspiration needs room to breathe.  When life becomes destination-oriented we run the risk of missing out on gains that are even better than we could imagine because we've only left room to do exactly as the plan dictates.

I know a person that has a nearly paid-off rental property.  She has long since perceived this property as part of her long-term financial plan.  She loves the idea of having passive income and real estate that's paid in full.  She uses a management company, a move which simplifies her life and is well worth the expense. Truly, this plan is flowing for her.  If she stays the course, she will do quite well.  Because she knows this and it's all flowing for her, she has literally never even entertained the idea of selling it despite the fact that if she did, she could easily fetch 4x her purchase price for the property.  Besides, then she would have to pay taxes on it, and her passive income would be gone.

What if this person were to allow their minds to wander; to frolic among the possibilities?  She's been so married to her plan, that in all honesty, she hasn't really entertained a variety of options where her rental is concerned.  One day, I was chatting with her and we decided to take a hike into the hypothetical.  What if she sold that property?  She could defer the taxes by doing a 1031 exchange (this allows you to avoid paying taxes on it if you sell one property and purchase another within a specified period of time; there are a lot of rules involved, so don't try this until you've done your homework on it).  As it turns out, this would allow her to put 50% down on a 4-plex in her area.  The remaining mortgage on the 4-plex would be covered (including taxes) consistently by having two units rented.  The income on the other two units would be hers.  Interestingly, the income from the remaining two units would be almost double the amount she will receive from her current rental property even after it's paid off.  To be truthful, this woman was flabbergasted by the entire idea and how doable it actually seemed.  She's not a huge fan of debt if she can help it, and may stick with her original plan.  That's absolutely fine.  But by being so intent on her original plan, she wasn't even allowing herself to engage in an experiment of the mind.

A mental experiment can be tremendously valuable because it lowers the stakes and subsequently invalidates the mind's automatic fear of failure and making room for natural curiosity to plant the seeds of inspiration.  Fear is often what keeps us from deviating from a plan.  We don't speak up at work because we fear losing our jobs.  We don't learn about investing in the market because we fear losing everything in a crash.  We don't quit a job to start our own business because we fear losing the perception of security.  The mind utilizes fear as a tool in order to keep us safe from harm, but when misused, it can prevent us from exploring the possibilities around us.  This woman may actually stay the course and keep her current property.  She may decide at some point to sell it, do the 1031 exchange, and invest in a multi-unit dwelling.  Either choice is a very smart money move.  She's winning either way.  That's one of the key takeaways here.  This isn't necessarily a win-lose scenario where if she chooses "X" she'd clearly be making a mistake.  She is likely to win either way! How fabulous is that?!  By opening her mind to possibilities outside of her original plan, she has discovered that there may be something out there for her that turns out even better than she imagined it.

So, please don't be in such a hurry that you miss out on the opportunity to flow into something better.  No doubt your plan is amazing, but there might just be something even more amazing just around the corner.  Don't be so blinded by racing against an invisible clock that you miss it.

Posted by Alacias Enger at 3:10 PM