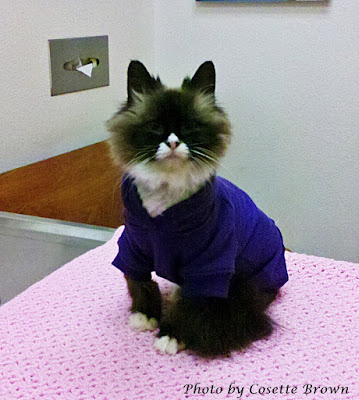 Confession Time:  My cat has health insurance.  In fact, Petunia's health insurance even covers some of her dental.  Human plans aren't even that good!  If that isn't confirmation that I've finally joined the middle class, I don't know what is!  But seriously, all joking aside, I think this is a topic worth bringing to your attention.

This past summer, we re-established Petunia's Veterinary Care.  When we lived on the West Coast, we were very well established with a veterinary hospital system, but hadn't done such a great job of getting reacquainted in New York.  Eventually, we found ourselves in a situation where we both had full-time incomes and health insurance.  That being said, it seemed to be the responsible thing to do to make sure Petunia was also being taken care of.

It turned out that the same veterinary hospital system we were using on the West Coast, exists here in NY as well.  Major score!  We called them up immediately and made an appointment.  We definitely felt ahead of the game because they had all of her previous records already in their computers.

We signed Petunia up for a health insurance plan that was a couple of steps above the basic plan.  We did this knowing that there were certain things included in the Optimum Plan that corresponded with her needs that were not included in the more basic versions of the plan.  We pay $40 per month for her insurance plan.  I have to be honest, I really hate having monthly obligations.  I avoid them at all costs.  The less bills the better as far as I'm concerned.  However, there is something I hate entirely more than monthly bills, and that's unexpected, astonishingly large bills...  Petunia's wellness plan is definitely saving us from that!  In August of 2017, we actually saved 61% on her veterinary bill because of her insurance plan.  We just took her back this month, and saved 53% on her veterinary bill.  Even when I added up the dollars saved, and compared it to the dollars we've spent on her services and monthly fees this year, we've still saved 36% this year on her medical expenses by having the insurance plan.  That's a substantial savings! Not to mention, let's be honest. She's getting much better care with insurance then she should without it.  Since she has insurance, we aren't hesitant about bringing her in to see the Vet.  She has unlimited office visits on her plan.  The regular fee for an office visit at her hospital is $80.  We pay $0.  Recently, she got an ear swab.  That typically comes with a $50 price tag.  We paid $0.  Comprehensive feline exams cost $45 typically; we spent $0.  I can go on and on about the things we didn't have to pay for this year, but I think you get the picture. 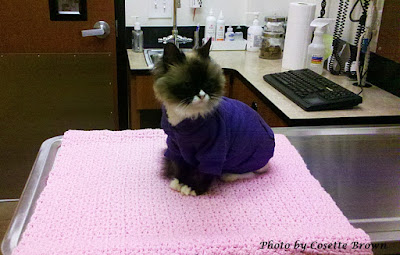 It's important to me to be a responsible pet owner, and that means providing my pet with basic veterinary care.  That care comes at a cost.  There's no way to eliminate that cost, but I've found that I can minimize its impact on my financial goals by keeping Petunia enrolled in an insurance plan that meets her needs, and eliminates fees for certain basic upkeep.

Do you use pet insurance?  Has it saved you money?  Would you recommend it to others?  Leave your thoughts in the comments below.
Posted by Alacias Enger at 6:28 PM